Jamal James heated up as the fight went on and outboxed Javier Molina down the stretch to win a 10-round unanimous decision.

Jamal James took a while to get heated up, but he never relinquished hold of the fight once he had it as he outboxed Javier Molina down the stretch at Club Nokia in Los Angeles.

The 6-foot-2 James came out and put his three-inch height advantage to good use, firing jabs with abandon to frustrate Molina, who couldn’t find a sustained attack.

Molina landed the bigger shots in the early rounds and made things interesting in the fifth with a couple of big overhand rights, but James shook it off and went right back to the jab as he controlled the distance against the former U.S. Olympian.

James continued to use his length to his benefit against Molina, who remained content to fire one-punch counters before retreating.

Molina never could solve James, who won a 10-round unanimous decision to remain unbeaten and continue his climb in a crowded 147-pound division. 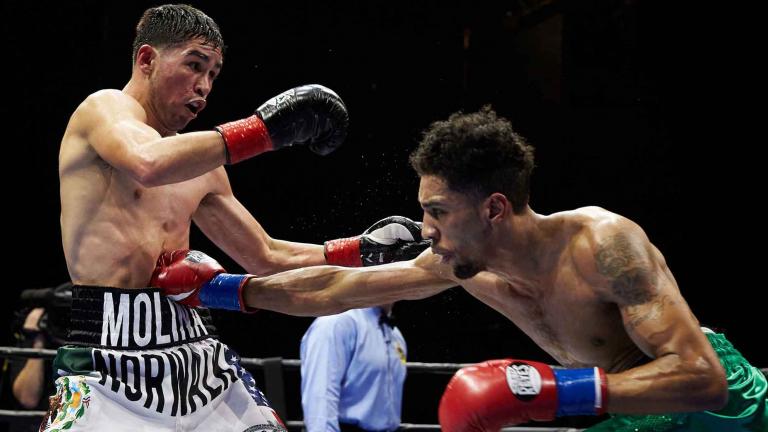 Jamal James used his length to get inside and earn a unanimous decision over Javier Molina at Club Nokia in Los Angeles. (Suzanne Teresa/Premier Boxing Champions)

Minnesota’s Jamal “Shango” James takes his nickname from the African god of thunder, lightning and fire, brandishing his fists in place of flames.