Jamel Herring hoped to neutralize 135-pound rival Denis Shafikov with his boxing ability and five-inch height advantage. Those hopes were dashed in a big way, as the 5-foot-5 Russian brawler and two-time world title challenger proved an unstoppable juggernaut on his way to a 10th-round technical knockout.

Shafikov (37-2-1, 20 KOs) battered Herring (15-1, 8 KOs) from start to finish, flooring him with a second-round right hook, bloodying his mouth with a fifth-round, 15-punch salvo, and pummeling during a vicious, one-sided ninth.

After that brutal stanza, Herring’s corner repeatedly threatened to throw in the towel if their fighter failed to mount a final-round attack. When Shafikov connected with a pair of left crosses that forced Herring into a clinch early in Round 10, they made good on that promise, with referee Gary Rosato officially ending things at the 36-second mark.

Herring swept the first round on all three judges’ cards as he tried to establish lateral movement early and use his jab to keep the oncoming Shafikov at bay. But the fight flipped in Shafikov’s favor for good with six seconds left in Round 2, when the 31-year-old underdog landed a right hand to the nose that dropped Herring, who was held up by the ropes on the ruled knockdown.

From there, Shafikov—who was in his fifth bout under trainer Abel Sanchez, cornerman for 160-pound champion Gennady Golovkin—continued his aggressive assault while landing the cleaner, more effective punches.

Meanwhile, Herring—a 30-year-old Marine veteran and 2012 U.S. Olympian—never was able to solve his Russian counterpart, falling for the first time in his 3½-year pro career. 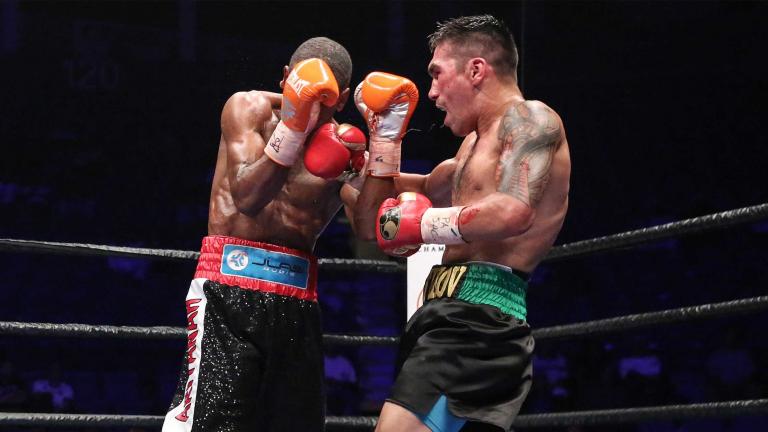 Herring to present tall order against Shafikov in 135-pound showdown

Jamel Herring has watched video of Denis Shafikov’s two losses, both of which came against taller, rangier opponents whose dimensions are similar to his own.

Herring hopes training with world-class colleagues pays off against Shafikov

Robert Easter Jr. and former champion Adrien Broner did it before scoring knockouts on the same April 1 card. It also worked for Rau’shee Warren in advance of his 118-pound title-winning victory earlier this month.