Marines veteran and former Olympian Jamel Herring took control of the fight with two fifth-round knockdowns, and blasted his way to a unanimous decision over Luis Eduardo Flores.

Battle-tested as a Marine, Jamel Herring faced the biggest challenge of his pro boxing career against Luis Eduardo Flores—and he passed by any metric imaginable.

Herring was sharp, elusive and altogether terrific as he picked apart Flores early and hammered him in the middle rounds en route to a wide unanimous decision.

That left hook paid off big time in the fifth when Herring dropped Flores to the canvas. Seconds later, Herring buckled Flores with a right for a second knockdown. The fight was never really in question after that.

Flores had never been stopped in his career, but the 28-year-old Colombia native slowed considerably as he kept trying to land a big right. He wasn’t any more successful late as he was early.

Herring’s superior footwork was too much for Flores as the 30-year-old southpaw danced out of harm's way. In return, Herring blistered Flores with an accurate array of punches as he continued to dominate the fight.

Flores went for broke in the 10th, and landed some solid shots early in the round, but Herring weathered the storm and then stayed out of range to seal the victory. 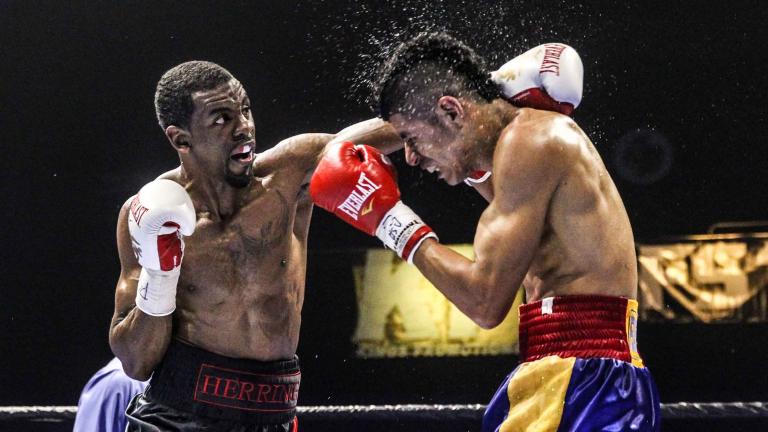 Before the 10th round began Tuesday night, trainer Mike Stafford’s advice to Jamel Herring was concise: “Make him miss, and make him pay.”

His last three fights came against boxers who had a combined 40 losses. Now it’s time for Jamel Herring to prove why he’s considered a top prospect at 135 pounds.

With just 14 bouts under his belt, Jamel Herring lacks the experience of most 30-year-old pro boxers. A couple of tours of duty in Iraq and a stint in the Olympics will tend to have that effect.