Javier Fortuna controlled the action for 12 rounds and held off a fierce attack from Bryan Vasquez to win a 130-pound showdown and stay unbeaten.

Khan vs Algieri and Fortuna vs Vasquez highlights: May 29, 2015

Javier Fortuna controlled the action for 12 rounds, and held off a fierce attack from Bryan Vasquez to win a 130-pound showdown and stay unbeaten.

Fortuna didn’t get the knockout he predicted, but he did he enough to hammer out a victory by unanimous decision over a game Bryan Vasquez.

In an entertaining, action-packed fight, Fortuna started strong and seldom let up, peppering Vasquez with power punches at will and then using his superior lateral movement to get out of the way when Vasquez sought to return fire.

Vasquez had his moments, particularly in Round 3 when he pounded Fortuna on the ropes, but Fortuna continually won rounds by coming strong in the last minute, earning a victory by unanimous decision to pick up a 130-pound title. 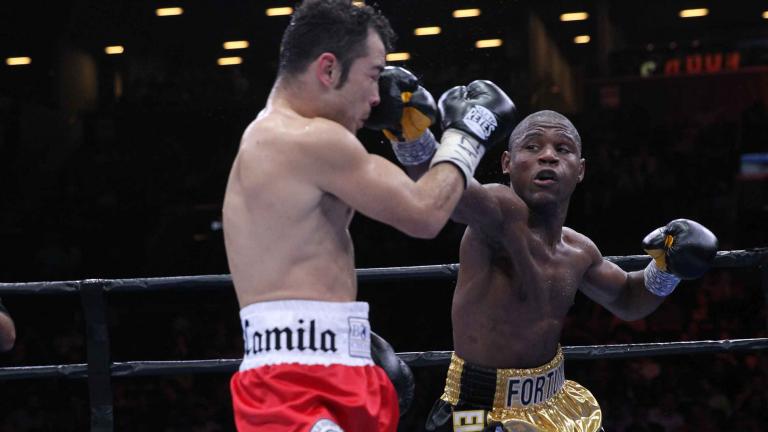 Amir Khan, Chris Algieri ready to get busy in Brooklyn

Amir Khan and Chris Algieri didn’t see eye to eye Thursday. Instead, Khan was looking up at Algieri during their staredown at the fighters’ weigh-in.

Fortuna to battle Vasquez in Brooklyn; Paulie Malignaggi out with injury

Due to an injury to Paulie Malignaggi, Javier Fortuna and Bryan Vasquez will now open the Premier Boxing Champions broadcast on Spike TV on May 29 live from Barclays Center in Brooklyn, New York, at 9 p.m. ET.