Miguel Flores used a high-volume attack to earn a 10-round unanimous decision over Ryan Kielczweski in a clash of rising 126-pound contenders. 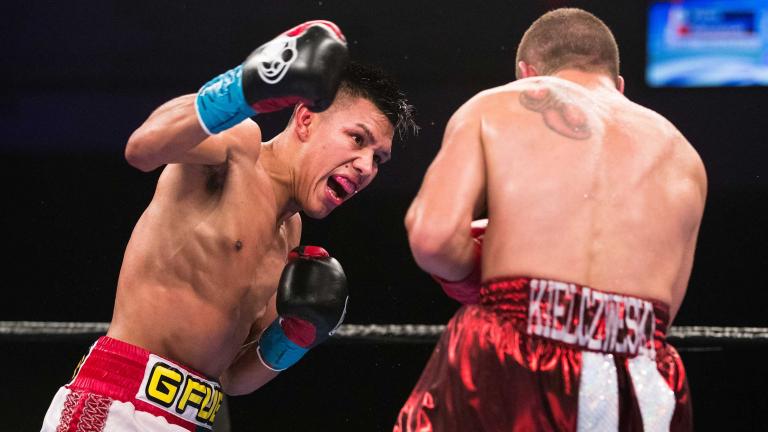 In a clash of 126-pound contenders, Flores (21-0, 9 KOs) used an aggressive body attack, superior mobility and workmanlike speed and accuracy to separate himself from Kielczweski (25-2, 7 KOs) as he won a close 10-round unanimous decision.

Two judges scored the contest 96-94, while the third had it 97-93. That gave Flores his third consecutive 10-round victory this year, meaning the 24-year-old has now won all but one of his fights by stoppage or unanimous decision.

Making his first East Coast appearance, the Mexico-born, Houston-based Flores came out strong, effectively targeting the body with both hands while countering Kielczweski’s lateral movement. Both fighters stood toe-to-toe frequently throughout the early rounds, but Flores generally got the better of the exchanges by alternately moving forward and backward as Kielczweski struggled to find a rhythm.

After four rounds, Flores was sitting on a big lead, with Kielczweski winning just one round—the third—on a single card. But then “The Polish Prince” found his groove in the fifth, backing Flores into the corner with a trio of jabs before landing his biggest punch of the bout: a right hand up the middle that rocked his unbeaten foe, followed by a similarly potent right to the ear.

Kielczweski outlanded Flores 44-23 in the fifth, which the 27-year-old from Quincy, Massachusetts, swept on all three cards. From there, Kielczweski had Flores fighting mostly in retreat—seemingly out of necessity—as both fighters had their moments in the second half of the all-action contest.

Kielczweski took Round 8 thanks to a series of hooks and hard right hands that found the mark, but Flores answered by winning several toe-to-toe exchanges in the ninth.

Despite having previously gone 10 rounds only once, Kielczweski turned up the aggression in the final frame, which ended with both fighters firing big shots in a down-to-the-wire phone booth exchange.

Although Kielczweski swept the 10th, it wasn’t enough to save him from his second career defeat.

With Miguel Flores and Ryan Kielczweski both looking to continue moving forward in the 126-pound division, the boxers are embracing the chance to unveil new dimensions of their respective repertoires in order to do so.

With so much excitement being generated atop the 126-pound division, Miguel Flores is looking to get himself a piece of the action.