Jaron Ennis makes short work of Custio Clayton, stopping him via impressive knockout in Round 2 of their IBF Welterweight Title Eliminator.

In what was supposed to be the toughest test of his career, Jaron “Boots” Ennis again made a mockery of pre-fight expectations, stopping the previously undefeated Custio Clayton via a second-round stoppage in an IBF welterweight title eliminator in the telecast co-feature in another scintillating performance from the Philly fighter. 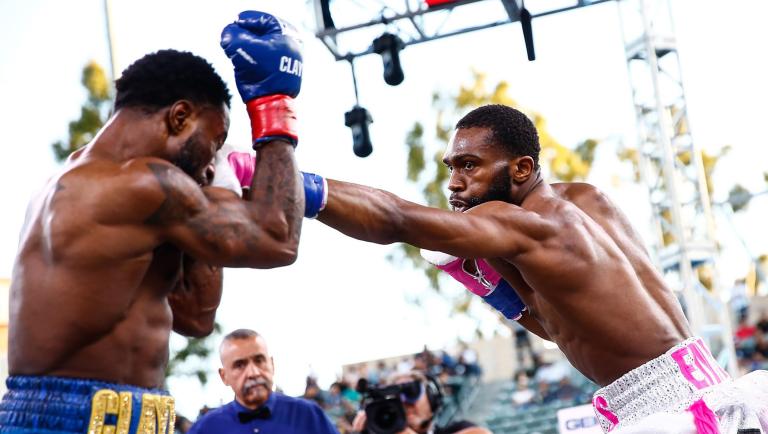 After pushing Clayton back with jabs, Ennis, 24, landed a sweeping right hand to the top of Clayton’s head behind his ear that caused the Canadian to crumple to the canvas. Clayton, a former Olympian known for his durability, tried to get up but was still dizzy from the punch and fell back down again. He finally managed to get to his feet and beat the count, but stumbled into the ropes, causing referee Ray Corona to mercifully wave the fight off at 2:49 of the second round.

Following the match, Ennis called out unified champion Errol Spence Jr., who was ringside. Ennis improved to 29-0 with 27 knockouts while Clayton suffered his first defeat, dropping to 19-1-1 with 12 knockouts.

“Anybody can get it right now,” Ennis said. “But I’m the IBF No. 1 contender and I think ‘Mr. Big Fish’ is here himself, so it’s time to go fishing,” he said referencing Spence’s nickname.

Spence responded, smiling as he commented on another dominant and electric performance from Ennis and another unsuccessful showing from an Ennis opponent.

Ennis, who previously stopped veteran contender Thomas Dulorme in the first round back in October, took control from the opening bell, unleashing a steady diet of jabs to Clayton’s face and body. With Clayton moving backward for the entire round, unable to respond, frozen by Ennis’ speed, the 24-year-old began to open up with rights and lefts while switching from righty to lefty as Clayton covered up.