Robert Easter Jr. didn’t get the knockout he was seeking against Luis Cruz, but he was no less dominant defending his world title in front of a hometown crowd. 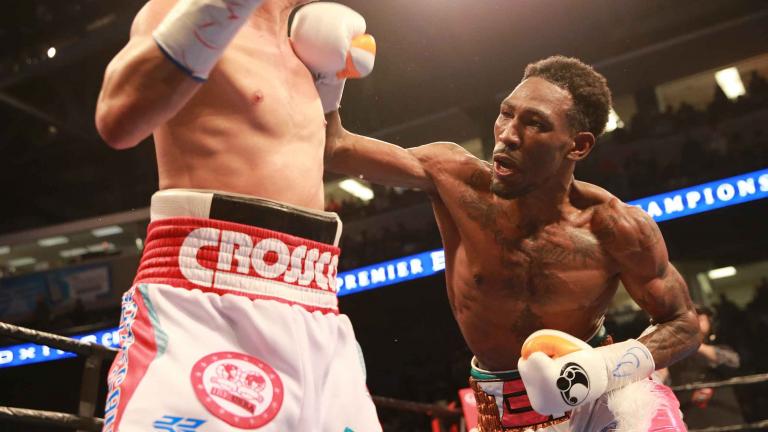 Easter capped a commanding performance with knockdowns in each of the final three rounds as he rolled to a unanimous decision over Cruz and retained his 135-pound world championship.

Fighting at home for the first time as a pro, Easter controlled the action from the opening bell as he used his superior length to keep Cruz at bay.

The 5-foot-11 Easter, an alternate on the 2012 U.S. Olympic team, effectively used his jab as he worked the body of his 5-foot-9 opponent during the early rounds.

Cruz, 31, found some success in Round 5 as he caught the champion with a left hook to the head, but Easter started digging in more with his punches in the sixth and pinned the Puerto Rican against the ropes before catching him with a straight right to the head.

Easter, 26, relied almost solely on his jab at times through the middle rounds, but it was a highly effective strategy as he snapped Cruz’s head back in the eighth and denied his opponent’s attempts to get inside.

After Cruz righted himself a bit in Round 9 by penetrating Easter’s defense and landing the more effective punches, the champion squashed any potential momentum in commanding fashion down the stretch.

Easter floored Cruz with a straight right early in the 10th and looked to end the bout, but the Puerto Rican underdog was able to survive the round.

The champion continued his dominance in the 11th when he buried a stiff right into the face of Cruz, who stumbled across the ring with his head down before Easter landed a left uppercut to score a knockdown in the closing seconds of the round.

Although well ahead on points entering the 12th round of his first title defense, Easter wasn’t content to coast over the final three minutes. Instead, he looked to put Cruz away and dropped him for the third time with an overhand right.

While it wasn’t enough to finish the job as Cruz danced away from the champion until the final bell, it was more than enough to secure an overwhelming margin of victory.

Cruz suffered his first defeat since he was stopped for the only time in his career by two-time title challenger Edner Cherry in July 2015.

With the win, Easter retained the title he earned in September with a split decision over Richard Commey in a Fight of the Year candidate in Reading, Pennsylvania.

This week in PBC Jabs, host Jordan Hardy recaps an exciting championship doubleheader, chats with Danny Garcia in the lead-up to his 147-pound title unification against Keith Thurman and previews our upcoming fight cards.

Robert Easter Jr. didn’t get the knockout he was seeking against Luis Cruz, but he was no less dominant defending his world title in front of a hometown crowd.

If his opponent’s recent résumé is any indication, Robert Easter Jr.'s first 135-pound title defense could be a quick one. Just don’t expect the new champion to go making any brash early-knockout predictions.