Robert Easter Jr. wanted to make a statement by being the first man to knock out former 130-pound champion Algenis Mendez. The 25-year-old Toledo, Ohio, delivered that statement with tremendous force Friday night at the DC Armory in Washington, D.C.

After hurting Mendez with a counter left hook in the fourth round, Easter finished off his opponent in the fifth with a blistering, head-swiveling right hand that resulted in a technical knockout in their 135-pound bout before a screaming, sold-out crowd.

Easter (17-0, 13 KOs) earned his fifth consecutive stoppage victory by taking down Mendez (23-4-1, 12 KOs) on the undercard of a Spike-televised main event between four-division champion Adrien Broner and Ashley Theophane.

The 6-foot Easter, who was coming off a third-round TKO of Juan Ramon Solis in October, pumped the jab from range in the first round, made effective use of his three-inch height advantage, moving in and out and firing rights to the head and body of his 5-foot-9 opponent.

Over the next three rounds, Easter engaged more toe-to-toe and exchanged to the head and body against Mendez, even absorbing and walking through an occasional overhand right to the temple.

The toll began to show on Mendez in the fourth round, when he was staggered by a counter left hook. The 29-year-old Brooklyn, New York, resident was able to maintain his balance from that shot, but not when Easter unleashed a swift, broadside right hand late in the fifth.

After getting struck with the blow, Mendez slowly sunk to the canvas. After several seconds, he rose to his feet, but referee William Johnson looked into Mendez’s eyes and didn’t like what he saw, waving an end to the fight. 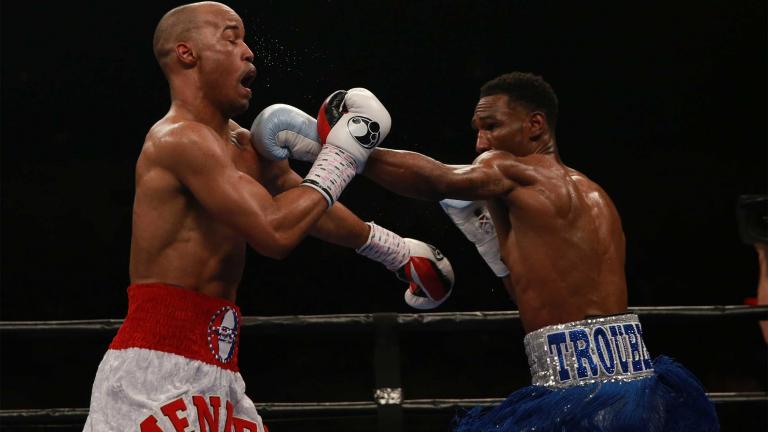 Robert Easter Jr. looks across the ring at Algenis Mendez and sees a fighter who is smaller, slower and less skillful. He also sees a fighter whose last loss was to Rances Barthelemy, a two-division champion whom Easter believes is no more talented than he is.

Although Robert Easter Jr. will officially be facing a former champion for the first time in his career when he takes on Algenis Mendez on April 1, the experience will be nothing new in the eyes of the 135-pound prospect.