Omar Douglas entered his 130-pound bout with southpaw Frank De Alba having vanquished three lefties, all by knockout. So it’s easy to understand why the 24-year-old Douglas walked into the ring in Bethlehem, Pennsylvania, supremely confident that he could take out De Alba well ahead of the final bell of their 10-round contest.

Turns out he needed every minute of every round to keep his record perfect.

Forced to go 10 rounds for just the second time in his career, Douglas  (16-0, 11 KOs) outgunned his opponent in a firefight before a raucous and largely pro-De Alba crowd, winning a narrow majority decision at the Sands Bethlehem Event Center.

Douglas took the fight to De Alba (17-2-2, 6 KOs) from the opening bell, using his jab to set up long, clean right hands. But he was unable to seriously hurt his Puerto Rico-born opponent, who began to find success countering Douglas in the third and fourth rounds.

Douglas seized control of the fight in the middle rounds, when he worked the body with both hands to slow De Alba, who was fighting about 45 miles from his home in Reading, Pennsylvania.

De Alba was wobbled in the eighth by a Douglas left hook, but he rallied over the final rounds of the fight, scoring with several crisp crosses, hooks and uppercuts that tightened things up on the judges' scorecards. 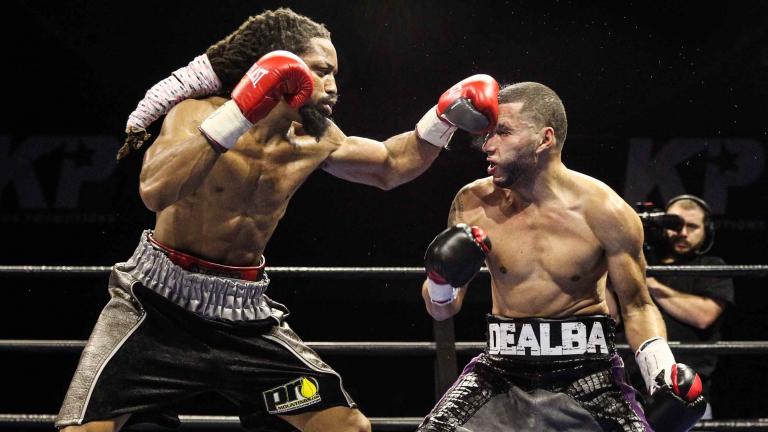 Omar Douglas was potent with both hands as he outboxed Frank De Alba to a 10-round majority decision in Bethlehem, Pennsylvania. (Lucas Noonan/Premier Boxing Champions)

If a boxer desires to graduate from prospect to legit contender, there comes a time when he must begin testing himself against like-minded competition. For Omar Douglas, that time appears to be now.