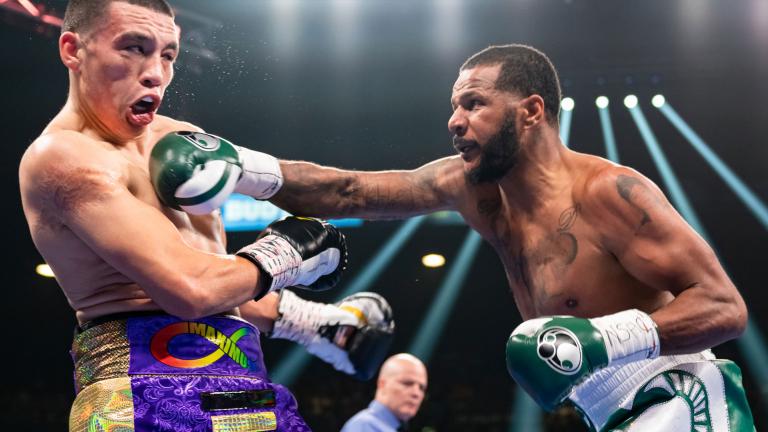 In the co-main event, Flint, Michigan’s Anthony Dirrell (34-2-2, 25 KOs) scored a stunning, highlight-reel knockout of Marcos Hernandez (15-5-2, 3 KOs) just seconds into the fourth-round. Dirrell wound up and unleashed a vicious right uppercut to send Hernandez flat on his back and score the one-punch KO. Hernandez beat the 10-count, but referee Celestino Ruiz called off the fight when the clearly injured and wobbly fighter rose to his feet.

“It was a spectacular knockout,” said Dirrell. “It was a punch we were working on. It wasn’t that wide. I used to use that punch way back when. I came up with the shot and he never saw it coming. My brother [Andre] was yelling at me and I said, ‘I got it.’ I saw it and I had to take advantage of it. I had to take it away from him.”

Dirrell, the former super middleweight titleholder, successfully rebounded from the disappointing draw against Kyrone Davis in February, and did so stylishly. The 37-year-old even capped off the KO with a celebratory backflip. Prior to that pivotal punch, Hernandez held a slight 46-40 edge in punches landed.

Former WBC Super Bantamweight World Champion Rey Vargas (35-0, 22 KOs) showed no signs of ring rust in his first fight in over two years, cruising to a unanimous decision over Leonardo Báez (21-5, 12 KOs) in a Mexico vs. Mexico matchup in the second fight of the telecast. Two judges scored the fight a shutout, 100-90, while the third judge scored it 99-91.

Fighting for the first time at 126 pounds, Vargas used his significant height and reach advantage to dictate the pace of the entire matchup. Vargas’ vicious body attack – he landed 71 body shots in the ten-round fight – broke down the much smaller and overmatched Báez, whose awkward style led to several accidental head clashes throughout the bout.

“We knew what we were in for,” said the 30-year-old Vargas. “We were prepared for a strong fighter. And we planned to outbox him. We had a lot of good exchanges and there were moments when I stood in front of him and landed my punches. I’m more of a technical fighter and not a brawler. The plan was to fight and to box and punch without getting punched. I had to stand there and throw big punches. But that’s part of the game.”

Already a former champion at 122 pounds, Vargas now has his sights set on becoming a two-division champion. “I was surprised he went the entire distance. He’s a good fighter and I don’t take anything away from him. I’m looking forward to my next fight being for a world title.”