James DeGale welcomed an offensive attack by hammer-fisted Mexican Rogelio Medina, and the 168-pound champions got every bit of that during a brutally contested unanimous decision victory Saturday at the DC Armory in Washington, D.C. 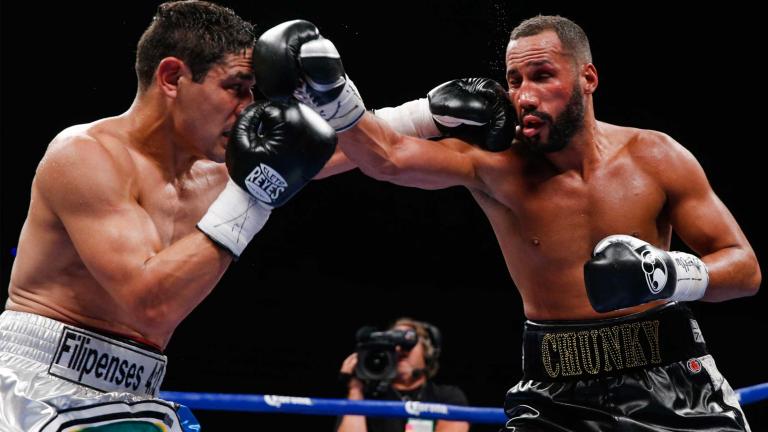 The latter two scores weren’t nearly indicative as to how close the fight really was, as Medina—who entered the fight on the heels of four consecutive knockout wins—gave the 30-year-old champion from England all he could handle.

Medina’s assault early in the contest left DeGale with welts and bruises on both cheekbones, but the 2008 Olympic gold medalist gained momentum through the middle rounds, when he out-maneuvered his rival, absorbing shots while also ripping double-handed counters.

Medina’s most dominant rounds were the sixth—which the 27-year-old won on all three cards—and the final three frames, when he chased and hammered DeGale on the ropes with several rights while sustaining his body attack.

The relentless Medina, who spit on his opponent in the 11th in a fit of frustration, complained of head butts, but DeGale was never reprimanded by referee Malik Waleed.

Although he came up well short of fulfilling his prediction of an early knockout, DeGale nonetheless did enough to win his 13th consecutive fight and successfully defend his title for a third time.

DeGale will next be obligated to face Badou Jack in a title-unification bout later this year. In the main event at the DC Armory, Jack held onto his crown with a widely disputed majority-draw against former champion Lucian Bute in a fight many observers believed Jack won handily.

James DeGale welcomed an offensive attack by hammer-fisted Mexican Rogelio Medina, and the 168-pound champion got every bit of that during a contested unanimous decision victory Saturday at the DC Armory in Washington, D.C.

James DeGale knows all about upsets. And the Londoner is adamant Saturday’s clash with Rogelio Medina is not going to be another one.

James DeGale's next two objectives: Take care of Rogelio Medina, then clean up the 168-pound division

James DeGale wants to make two things very clear: First, he has huge respect for Rogelio Medina, his next opponent. Second, he insists Medina is merely a stepping stone to his ultimate goal—namely, total domination of the 168-pound weight class.