Hugo Ruiz stopped Julio Ceja 51 seconds into Round 1 with an overwhelming attack to win the rematch of their 122-pound title fight.

Ahead of Saturday’s 122-pound rematch against Julio Ceja, Hugo Ruiz insisted he’d “be more aggressive” than he was in August, when he lost to Ceja in a thrilling world title fight. 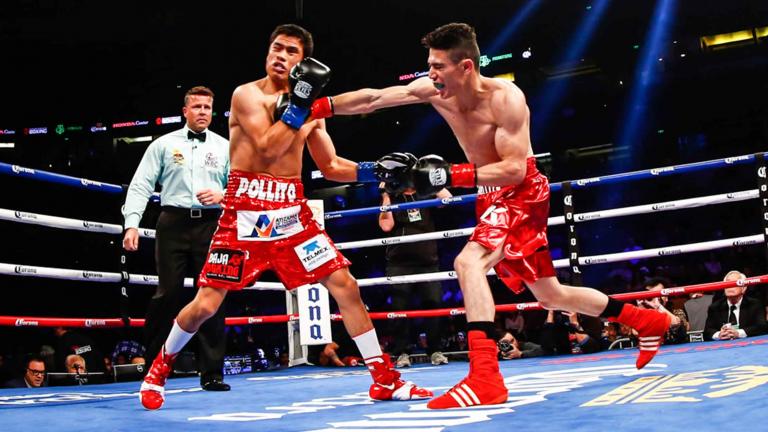 Hugo Ruiz connects with a right to the jaw that sent Julio Ceja crashing to the canvas just 13 seconds into Saturday's 122-pound world title tilt in Anaheim, California. (Stephanie Trapp/Showtime)

In another crowd-pleasing—albeit swift—masterpiece of fistic violence, Ruiz dropped Ceja 13 seconds after the opening bell rang and finished him off moments later to claim his Mexican rival’s championship at the Honda Center in Anaheim, California.

The taller man by four inches, the 5-foot-9 Ruiz leveraged his power into a straight right hand which he blasted off Ceja’s jaw, sending him crashing to the canvas. Ceja rose, but was noticeably limping on his right leg, which twisted awkwardly underneath him during the knockdown.

When the fight resumed, Ruiz smelled blood and unleashed a barrage of punches that Ceja couldn’t answer, forcing referee Thomas Taylor to step in and protect the defenseless ex-titleholder for a shocking 51-second stoppage.

Given the way their first meeting played out, it wasn’t surprising that the scheduled 12-round rematch failed to make it to the finish line. Each fighter hit the deck back in August, with Ruiz scoring a third-round knockdown with a counter left hook and Ceja evening the score with the exact same punch in the fifth that put Ruiz on the canvas.

Although Ruiz got to his feet, Ceja immediately unleashed an all-out assault that led to the fight’s conclusion. On Saturday, Ruiz once again scored the first knockdown, only this time, he finished the job.

Ahead of Saturday’s 122-pound world title rematch, Hugo Ruiz insisted he’d be more aggressive against Julio Ceja than he was in August, when he was stopped in the fifth round of a thrilling, high-action bout.

As Julio Ceja struggled to catch his breath, 13,109 pairs of lungs did the same. There Ceja was, down on the canvas, the crowd surrounding him in the opposite stance.