Consider youth served. Jermall Charlo, 17 years the junior of 42-year-old veteran Cornelius Bundrage, announced himself with a roaring statement Saturday at Foxwoods Resort Casino with an absolute whitewashing of the defending champion.

Charlo jumped out to an early lead with a chopping right over Bundrage’s jab with about a minute to go in the first round that sent Bundrage sprawling to the canvas. But Charlo wasn’t done there—not by a long stretch.

He popped Bundrage with a left jab in the second that again scored a knockdown. It was just a matter of time at that point.

In the third, Charlo wobbled Bundrage with a left and as he was staggering back toward the ropes, Charlo pounced and pinned him in the corner, dropping Bundrage one more time.

Three down, three back up for Bundrage as the game veteran clambered back to his feet. But it wasn’t his night.

Charlo threw a left jab that Bundrage slipped, but as he moved his head to the right, it went directly into the path of a thundering right hook from Charlo, and with 27 seconds left in the round, that was enough for referee Johnny Callas, who stopped the fight.

With the victory, Charlo remained unbeaten and became a 154-pound world champion. 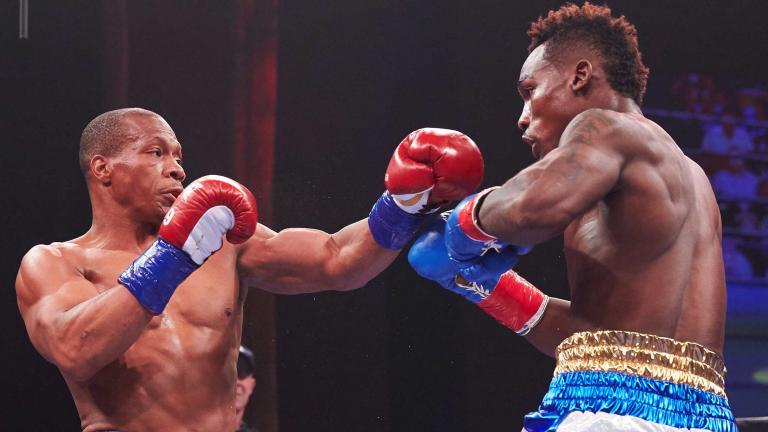 Title hopeful Jermall Charlo is a lion in spring

Scrawled across Jermall Charlo’s pecs: “Heart of a Lion.” The full-blown chest piece stretches from the middle of his sternum to just before his navel with a roaring, wild-eyed king of the jungle.

Peter Quillin battled to a hard-fought draw against Andy Lee in his PBC debut in April. Now Kid Chocolate looks to get back in the win column when he takes on Michael Zerafa in a meeting of 160-pound contenders September 12 live on NBC from Foxwoods Casino in Mashantucket, Connecticut, at 4 p.m. ET/1 p.m. PT.