Fighting in his hometown, Adrian Broner eked out a split decision over Adrian Granados in an action-packed 147-pound clash.

Adrien Broner insisted from the get-go that his fight against former sparring partner Adrian Granados wasn’t going to be easy. Some may have thought the former four-division champion was simply trying to hype a bout he was co-promoting. Turns out, he was being 100 percent truthful. 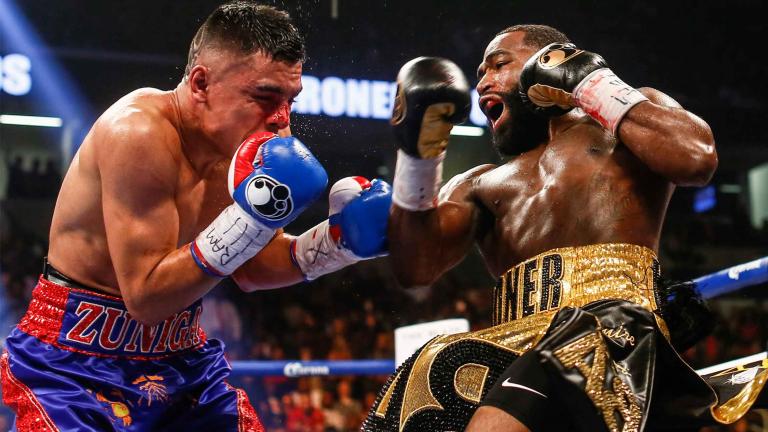 Adrien Broner fires a right uppercut at Adrian Granados during their 147-pound clash Saturday night in Cincinnati. Broner prevailed by unanimous decision in a 10-round, high-action fight. (Stephanie Trapp/Showtime)

The victory in his official 147-pound debut was Broner’s third in a row and came on the heels of a career-long 10-month layoff. Conversely, Granados (18-5-2) saw a five-fight winning streak halted as he ended up on the wrong side of a narrow decision for the fifth time in his 8½-year pro career.

The familiarity between both fighters—who not only had a sparring history but are close friends—was evident from the outset. Knowing Broner had struggled in the past with aggressive opponents, Granados immediately pressed the action and continued to do so for virtually the entire 10 rounds.

Broner, however, was more than ready for Granados’ come-forward tactics, answering his fellow 27-year-old foe’s aggression with well-timed counterpunches, namely a right uppercut and left hook that frequently hit the mark.

Granados displayed his toughness, though, walking through shots and answering with several combinations to the head and body, usually while fighting in close. The Illinois native did so as blood streamed down his face after a clash of heads in Round 3 opened a gash on the bridge of his nose.

As much action as there was throughout the fight, there were also several lulls that were the result of frequent holding, much of which was initiated by Broner. That made the fight very difficult to score, as evidenced by the fact that the judges were in complete agreement on only the opening two rounds, with Broner sweeping Round 1 and Granados taking Round 2.

Even in the 10th and final round, the two fighters had their moments, including near the midpoint when they landed big right hands simultaneously. But two punches in the final 10 seconds—a short right uppercut-left hook combination by Broner—may have been the difference, as the former champ won the round on two scorecards, including Pope’s.

Had Pope given the 10th to Granados, the fight would’ve ended in a draw.

Adrien Broner insisted from the get-go that Saturday’s fight against former sparring partner Adrian Granados wasn’t going to be easy. Some may have thought Broner was simply trying to hype a bout he was co-promoting. Turns out, the former four-division champion was being 100 percent truthful.

Broner, Granados ready to get reacquainted in 147-pound showdown

Adrien Broner and Adrian Granados have spent plenty of time together in the ring, but it’s never really counted until now.

Broner set to return to the ring a more focused, mature man

There comes a point in every man’s life when he must look himself in the mirror, take a deep breath and utter the following phrase: It’s time to grow up. Of course, the words ring hollow if they aren’t accompanied by actions. That’s something Adrien Broner insists he finally understands.