Britain's James DeGale regained his IBF title with a unanimous decision win over Caleb Truax in an exciting rematch of their December 2017 bout.

Britain's James DeGale regained his IBF title with a strong UD win over Caleb Truax in an exciting rematch from their December 2017 bout in the UK. 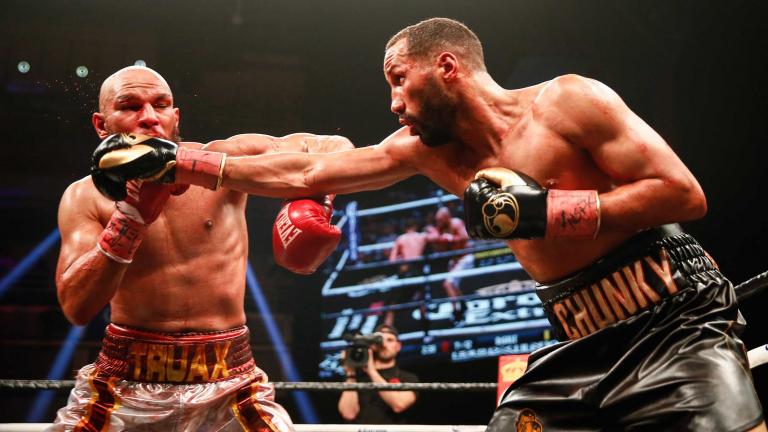 James DeGale earned back the IBF Super Middleweight World Championship with a unanimous decision in a rematch with Caleb Truax, taking back the title he lost last December in the near-universal upset of the year.

"Two-time world champion. It feels great," DeGale said. "But full credit to Caleb - he shows he can mix it with the top fighters.

"I'm just happy that I'm a two time world champion and I got my IBF world title back. I'm back, Team Chunky, we're back. Two-and-a-half years I had it and I lost it to Caleb. He embarrassed me, but we're back."

DeGale (24-2-1, 14 KOs) overcame a massive cut from an accidental head butt in the third, which was mistakenly ruled as the result of a punch from referee Robert Byrd.

"I couldn't see from my right eye, DeGale said. "I like Robert Byrd (referee), but today he was a bit wrong. I couldn't see. But I'm just glad I got through it. I showed some heart. In my last fight, I was like a weak little kid."

DeGale connected on 37 percent of his power shots compared to 28 percent for Truax. He now returns to London a world champion with some massive potential fights in the future.

"I want to be busy," DeGale said. "I have a couple years left in this sport."

Truax (29-4-2, 18 KOs), who fought for the first time as a world champion, was disappointed and advocated for a rematch after the scores were announced.

"I gave him a rematch straight away so why not do it again."

Caleb Truax and James DeGale battle in a 168-pound world title Rematch in the co-main event of the Showtime-televised card from the Hard Rock Hotel and Casino.