Keith Tapia used his significant height and reach advantages to break down Garrett Wilson and remain unbeaten in a decisive unanimous decision.

Keith Tapia overcame a cut over his left eye and delivered a gutsy display of superior power, combination punching, composure and stamina at Sun National Bank Center in Trenton, New Jersey. It all added up to a convincing unanimous decision over steel-chinned journeyman Garrett Wilson.

Despite having a six-inch height advantage over the 5-foot-8 Wilson, Tapia chose to engage toe to toe in the center of the ring from the opening bell, landing jabs, crosses, hooks and uppercuts to the head and body—all with both hands.

Midway through the first round, Tapia briefly staggered Wilson with a thunderous right hand, then followed up with a similar blow at the 50-second mark. In so doing, he delivered a hard-hitting message to Wilson. Soon after, Wilson delivered a similar message of his own, shaking Tapia with a right hand late in the second—a shot that caused the cut over the unbeaten 25-year-old’s eye.

Unfazed, Tapia answered with a vicious counterattack that left Wilson stunned prior to the end of the round. Then in the third, Tapia’s right uppercut knocked Wilson back at the 1:40 mark, but Wilson again hammered Tapia with a thundering right late in the round before eating a right uppercut before the bell rang.

Wilson’s best round came in the fourth, which the 33-year-old won on all three judges’ scorecards. The highlight came when he pounded Tapia into the ropes with consecutive looping rights at the midway point. But Wilson failed to fully seize the momentum.

From there, Tapia took complete control and impressively closed the show, highlighted by a blistering stretch in the ninth round when he landed 14-unanswered blows, all to Wilson’s head.

While Tapia kept his perfect record intact, Wilson saw his three-fight winning come to an end. 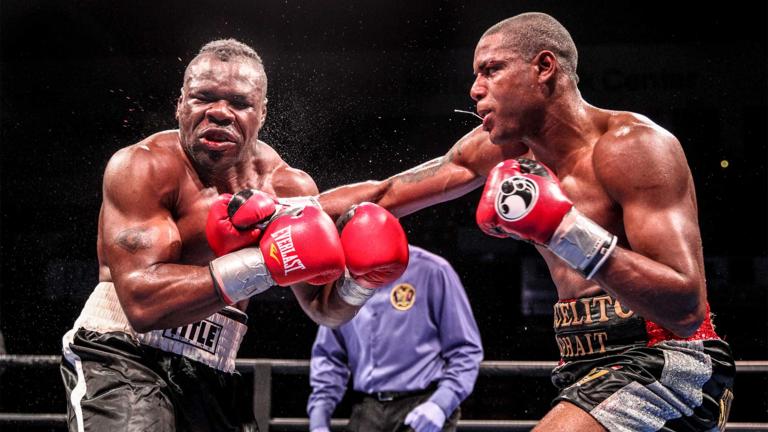 Keith Tapia’s life growing up in New York was one of daily survival each time he walked out his front door.

As yuletide carols are being sung by the fire, yuletide fists will be swung in the ring when countrymen Juan Dominguez and Yenifel Vicente rumble December 8.