Alexis Santiago used a high-octane attack to earn a 10-round unanimous decision over tough-nosed Erik Ruiz and elevate his status in the 118-pound division.

Leave it to “Beaver.” Yes, naming oneself after one of the world’s largest rodents may seem a tad peculiar for a prizefighter, but Alexis Santiago played the part in Las Vegas as he ground down Erik Ruiz over 10 rounds as if going to work on an aspen.

With the crowd chanting his nickname at Sam's Town Live, Santiago won a hard-fought unanimous decision over Erik Ruiz in a high-octane rager.

This was a brawl from sweaty start to chest-heaving finish. Neither fighter displayed much head movement or any real interest in working the ring, preferring instead to stand before one another in the center of the ring and bang, their punches snapping like a string of lit firecrackers.

From the opening bell, Santiago was an especially energized, in-your-face presence, snapping off a crisp jab, blitzing Ruiz with combos, working the body hard and landing uppercuts at will.

For all of Santiago’s come-forward chutzpah, however, Ruiz was just as eager to trade as he made nearly every round a back-and-forth battle.

Still, Santiago’s quicker hands and tireless work rate were too much for Ruiz to overcome, as the 25-year-old Phoenix native just kept grinding his opponent down, pulling away to earn a wide decision in a fight that was more competitive than the scorecards might suggest (100-90, 99-91, 98-92).

Oh, and about that nickname? Santiago says that he got it the first day he went into the gym as a youngster, when some other kids goofed on the size of his teeth. All these years later, “Beaver” is still demonstrating that he packs plenty of bite as he took a huge step forward in the 118-pound division. 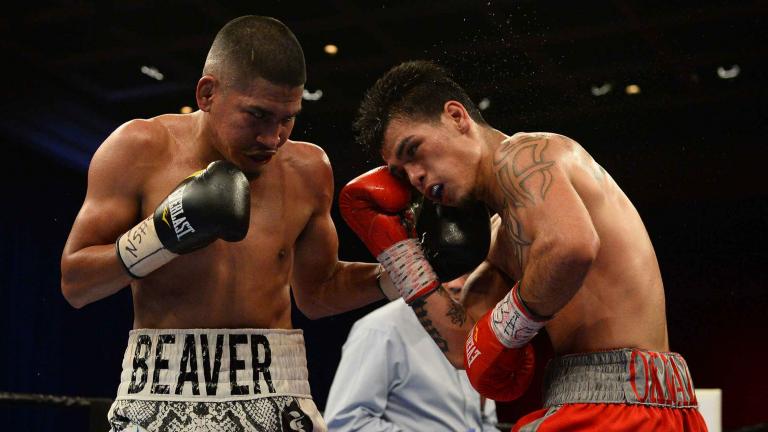 Prefer your boxing served up like a sampler platter, so you can enjoy a little taste of everything? Then you might want to consider clearing your calendar on February 16.