Cuban star Erislandy Lara retained his 154-pound world title with a third-round TKO over Jan Zaveck, who injured his right shoulder in the loss.

Neither a rainstorm nor Jan Zaveck could deter Erislandy Lara as the Cuban-born southpaw convincingly defended his 154-pound world title for the third time with a third-round technical knockout in South Florida. 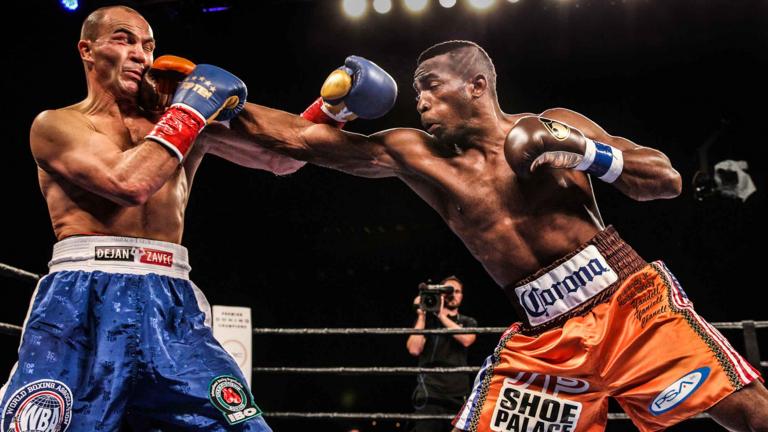 Lara (22-2-2, 13 KOs) was uncharacteristically aggressive as he dominated his 39-year-old rival from the opening bell, not wasting any time following a rain delay at Hialeah Park Racing & Casino's outdoor arena in Hialeah, Florida.

After having an easy time of it in the first two rounds, Lara hammered away at Zaveck (35-4, 19 KOs) in a corner of the ring in the third, highlighted by a head-popping straight left that split the guard of the former 147-pound champion.

Early in the third, Zaveck turned toward referee Telis Assimenios and simultaneously gestured with his outstretched right hand toward Lara, who nailed his Slovenian opponent with a couple of punches to the head before Assimenios stepped in to protect Zaveck and waved an end to the fight at the 41-second mark.

Zaveck said afterward that he experienced a muscle spasm in his right shoulder that he believes was caused by a punch to the right side of his neck in the final round.

The technical knockout was Lara's third straight win since losing a split decision to Saul "Canelo” Alvarez in July 2014. It was his first stoppage since he rose from a pair of knockdowns to gain a 10th-round TKO of Alfredo Angulo in June 2013.

Why ‘American Dream’ Erislandy Lara is such a nightmare to fight

At some point, a move to 160 pounds might be in the cards for Erislandy Lara. Could even be as soon as next year. And if the 154-pound champ does step up in weight, there’s a fighter in that division that has a reputation—as Lara does—for having slightly reluctant opposition.

Erislandy Lara is a Cuban defector who epitomizes his nickname—“The American Dream”—as much as anyone in boxing. So it’s only fitting that Lara’s next title defense would be staged the day before Thanksgiving—and in his adopted hometown.